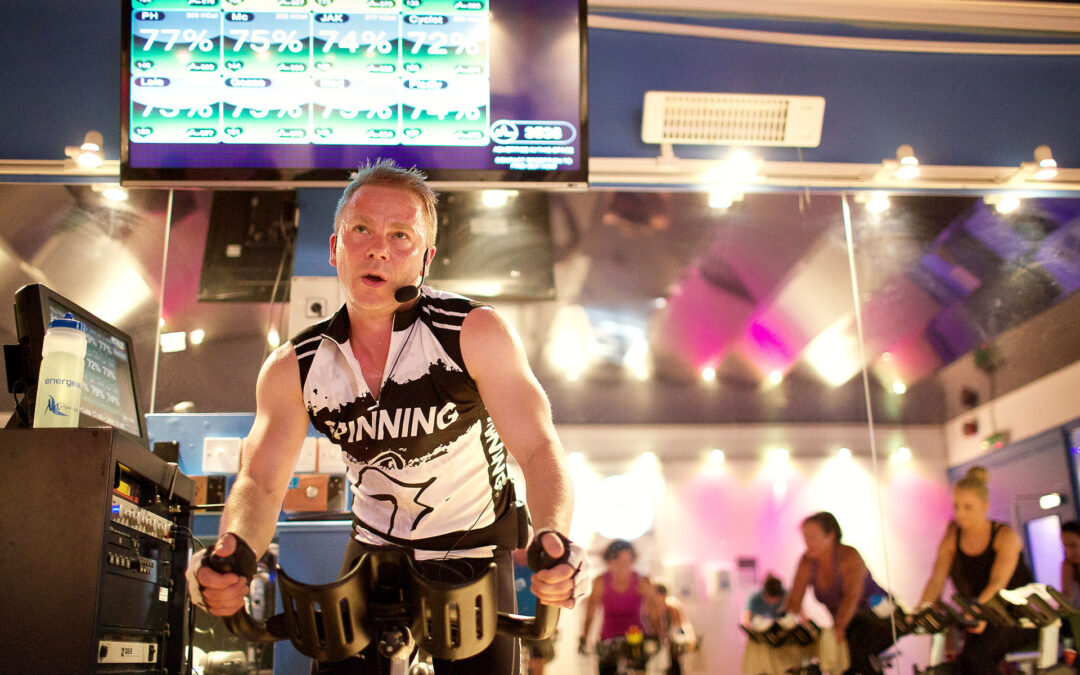 I saw your friends in the gym long before I met you. These people would come clattering out of a studio on weird clumpy shoes, florid, smug, cascading sweat from their gaudy lycra. Clip-clopping across the floor in bright colours with steam rising from them, they seemed to be a collision of both horse and jockey, and the worst of both. To me, your friends looked like utter wankers. I didn’t care for them and I didn’t want to meet you.

Something about you bewitched me from afar though. Your siren song of thudding bass called to me as I passed the studio. A tantalising glimpse through a narrow strip of glass into a darkened room beckoned me to know more. You already had me, and I didn’t even know I was lost.

Spinning. You bitch. You ruined me. When I plucked up the courage to enter that darkened musky lair, you threw me on your flywheel and had your way with me. When you spat me out 45 minutes later I tottered home on the trembling legs of a new-born gazelle, and I lay on the sofa and I confess, I thought about you.

Spinning. I wanted to impress you. I bought the lycra, I surrendered to the clattery shoes. I invested in hundreds of frigging heart rate monitors that each lasted a matter of weeks but you told me I must have them, and I didn’t know how to say no. I didn’t want to say no. I wanted more of you. By the time we reached our first anniversary – the Perineum Anniversary – I was qualifed to instruct you, and that is when we officially put a ring on it but Spinning® I know although I had the title of instructor, I was only ever your servant.

Oh, Spinning®! Those early days – the adventures we had! Remember how we could talk about nothing else? Remember how we’d stay up all night just listening to music? Remember we’d drive miles for almost no money just for the thrill of showing off to another crowd? Sometimes people were so moved by our passion that they’d have to leave almost immediately, but we didn’t care – we had each other. We tried everything – although sometimes just once, like the shorts you got me from China that drew blood from my scrotum. They were not a keeper.

By the time we reached our second anniversary – The Gel-Pad Anniversary – we were putting it about a bit weren’t we? Ten times a week for a while wasn’t it? I learned how to please you, and I wanted to show you off. Your friends kept coming to classes but it was you they were there to see. I was merely the oven glove; you the sizzling dish.

I must admit I still didn’t like all of your friends. Some were rude. Some were often late and argued black and blue that they were entitled to a bike – I hated those ones. Some vomited. Some fainted. They all moaned about the booking system and the timetable. They could be a bit high-maintenance. One blew a one-fingered snot-rocket onto the floor and left it there like a slippery opal. One read their kindle through an entire class, ah, I think I hated that one the most. Some, bless them, felt so comfortable that they’d ask for the volume/air con/fans to be set just so for them personally and fuck everyone else in the room.

If I’m totally honest, some of them smelled.

Then there was the one that came to me at the end of a class and said ‘You must get this absolutely all the time, but you sound exactly like Gok Wan!’ I never knew what to make of that and no, I don’t get that all the time. Just that one time in fact.

Most of your friends were wonderful though. Turning up week after week after week. Keeping our classes full and our egos robust enough to do it again and again. My dear Spinning® although our story takes a gloomier turn, I’ll always be grateful for the friends you gave me.

So Spinning® the trouble with doing it again, and again, and again, and again is that it becomes dutiful. By the time we got to our tenth anniversary, which is a pretty big one – Lycra – we didn’t have quite as much edge, did we? We’d stopped racketing about the South East in search of fun. We didn’t try anything new for years. I know we no longer stayed up all night just listening to music, but did you notice when we stopped? I’m ashamed to say I didn’t. I mean – I was happy, we were happy. It was just a bit more, well, comfortable wasn’t it? We didn’t need to be adventurous – we had our moves and they worked for us. It wasn’t broken so we didn’t feel the need to fix it, but I guess I can admit we got lazy. I was no longer the oven glove to your sizzling dish; I was the shovel and you the shit.

I feel terrible about this, Spinning® and I know it hurt you. I tried another brand – oh don’t look at me like that – we all go through these stages. Everyone was doing it and I felt left out. I promise it meant nothing. Nothing. But the damage was done.

By our eleventh anniversary… what’s the eleventh anniversary? I know it used to be The Peloton Anniversary, but they definitely changed it a few years ago. Anyway, by then – and I know this hurts – I’d decided to leave you. We spoke about it – I just didn’t want to do it every week anymore. I wasn’t saying never again, I just needed a break. Possibly forever, though possibly not.

We never got to separate though. A virus was making its way around the world and people were getting very nervous. Gyms were quieter. I’d told you we’d stay together until Easter 2020 and then pedal off into the sunset and maybe keep in touch, but we never got there. In March I became concerned that thirty of your friends huffing and puffing in my face might give me Covid, and I decided to avoid them. A week after that we were all instructed to avoid each other completely and definitely not huff and puff in people’s faces. The world shut down, but we never got to say goodbye.

I’d never have guessed that by the time we got to our 12th anniversary – Broadband – our love would be enjoying an unexpected Indian Summer.