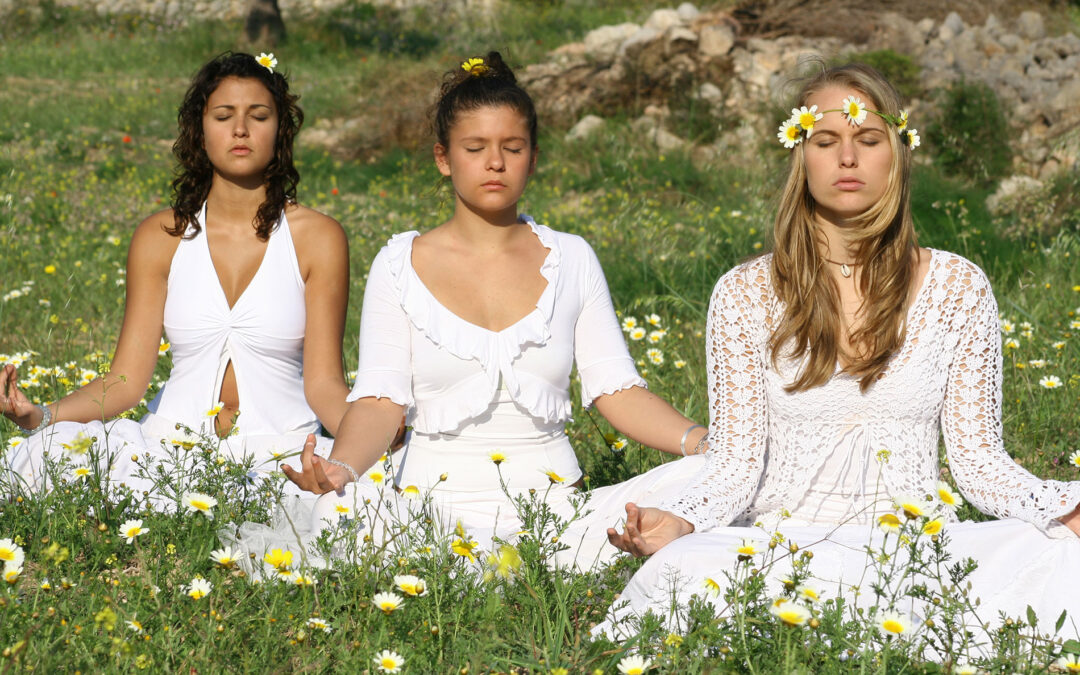 There’s a certain type of yoga devotee that gets my hackles up. Most don’t, you understand, most are just fine and dandy. I have many friends who love and even teach yoga and they don’t bother me one bit.

However, in gyms, there is a certain type. Let’s call her Mariella. Mariella is so passionate about yoga that she simply won’t accept that you aren’t. Whatever you say. Ever.

It doesn’t matter what you’re talking about Mariella will, with scalpel-like precision, manoevre the conversation to include an anecdote in which she fares rather well – either by virtue of being bendy or serene. Or both. It’ll run something like this:

‘….yah, so even though I was thrown clear of the wreckage a good forty feet, I tuned into my practice, centred myself, got up and just carried on with my journey on foot…’

Then, she’ll straighten her spine slightly, effect the ghost of a smile, drop her eyelids to half-mast and her voice an octave and murmur ‘I do yoga.’ One eyebrow elevates a millimeter. ‘Do you?’

I already know that I’m sunk. She’s pausing for my answer. It’s a gracious pause but I know that if I answer truthfully she’ll want me to get my unenlightened carcass out of her sight before I get shit on her aura.

Mariella  ‘Ah you didn’t really get it then – try it again – you need to connect. You’ll love it!’

Me: ‘What about me not liking yoga leads you to believe I will, in time, love yoga?’

Mariella (as if she hasn’t heard me): ‘You haven’t found the right type, which did you do?’

Me: ‘No idea. The one that’s like an aggravated nap?’

Syllables will now start to issue from her. Ashtanga? Vinyasa? Hatha?’ Down another octave ‘Bikram?’

You just have to walk away once this starts.

I’m willing to admit, though, that there clearly is something about it I just don’t get, so I decided to give it one last try. A few years ago I found myself in Bali, in a gorgeous resort in the canopy of a rain forest. It was achingly beautiful and screamingly expensive. One of the spa options was to have a 90-minute one-to-one yoga session with an expert instructor – let’s call her Patchouli. This is what I wrote at the time:

I am in a rainforest. I am on a covered wooden platform that’s built out over a stream and it couldn’t be more beautiful. I am here to finally GET yoga, as people insist I will. I figure if I can’t love yoga here, I can’t love it anywhere.

Patchouli is dressed in flowing white cotton that you can clearly bend in. She keeps smiling serenely at me. There’s an orchid in her hair that I suspect is actually growing out of her head. She radiates serenity. This woman’s nearness would heal open wounds and make soufflés rise. This woman’s smile wouldn’t falter through a 14-hour labour. I’m certain that this woman has never, ever, farted.

After a lot of smiling and bowing we’re off, and fifteen minutes later I have put my hands together in front of ‘centre heart’ (whatever the fuck that is) and lowered my head slightly. If I wasn’t so excited about being imminently enlightened, I’d be really bored.

Then Patchouli tells me inhale and my inner lotus blossom clenches a little. I’ve literally just inhaled and very much looking forward to exhaling. I don’t want to be rude but I also don’t want to explode so take the path of least resistance and hold my breath for a bit, then snort and start gulping at the air in front of me like someone failing to swallow a lump of gristle. It isn’t relaxing. Enlightenment seems distant, the hotel bar even further.

I take responsibility for my own breathing and we move on. Soon I’m standing on one leg, reaching forward towards something that isn’t there and I’m not liking the feeling. I’m paying for this feeling and it’s an awful one. She tells me to lengthen from my fingertips to my toes, but I know that that’s actually a fixed distance and can only be extended by injury. It’s five hundred fucking degrees in the rain forest and I am a festival of sweat, my clothes are actually dripping; Patchouli’s white cotton is bone dry.

Why can’t I just say ‘Cheers, Pat, but this isn’t my bag,’ and go? Perhaps because I am still nursing a faint hope of getting yoga. But I’m starting to dislike Patchouli a lot.

Then things look up for a bit. We go through a sequence that I can see some purpose to. No essential oils, made up words, or sanctimonious octave-dropping. I’m just doing some gorgeous, deep, relaxed stretches, and it’s, well, it’s quite nice.

So just when Patchouli seems to be onto a winner with the stretching, she asks me to focus on a chakra – it doesn’t matter which one because they are makey-uppy things and I know it. Oh alright – you can’t prove a negative – but I don’t think my body has spiritual energy vortexes loafing about just in case I start to believe in them. You might as well ask me to focus on the tooth fairy. I am paying good money now to sit still and focus on something I don’t think exists. I’m not happy. Then it gets worse.

Next phase of the session – get this – relaxation. That’s it. I lie down and relax and indeed I half go to sleep. It’s nice enough, but I do this all the time by myself without paying for it. But it’s awkward on the platform with Patchouli, she’s really getting on my tits now. For this reason, when she wakes me up with a head massage I don’t try to stop her.

My head is a rotten stump of sweat and hair product and it must be vile to touch, however tranquil you are. But for the cash I’ve parted with I expect more than fifteen minutes of stretching and an hour of fart-arse chakra prodding.

Patchouli leaves quickly, no doubt to boil her hands. She’s got a chunk of cash to spend on dream catchers and incense and shit, and I have lost a chunk of holiday. We don’t part as friends.

So I have tried. I have really tried. I have attempted yoga enough to know it’s not for me. If you need to be in a studio full of strangers in order to relax, do yoga. If you need to ditch your kids with the nanny and roar up to the gym in your Evoque for a bit of mid-morning spiritual dabbling and a turmeric latté then good for you. If you need your chakras shaved and tapered twice a week to feel good, then by all means crack on. But please don’t try to convert me, I’m done with trying. I choose to namaste away.